On July 26, 1581, independence issued forth among the Low Countries and a birth of freedom swept through the lands. The beginning acts of the Eighty Years War began to loosen the hold of Catholic dogmatism and repression. The influence of Philip II of Spain, a devout Catholic, faded and dissipated among the Calvinist Dutch, releasing a frenetic energy in the sciences and arts. Soon Dutch merchants were covering the globe looking for opportunities and discoveries, filling the cities with goods and ideas from other cultures. Franz Hals (1580-1666) and Rembrandt Harmonszoon Van Rijn (1606-1669) flourished artistically in this atmosphere of free thought and free expression. Yet one would start life in optimism and end in resignation, while the other would be pummeled with tragedy early and often, but lavished with the fruits of labor and success. Beginning in similar circumstances, Hals and Rembrandt would understand life very differently.

Frans Hals, born in Haarlem to a cloth worker and a local girl, grew up in free Netherlands. Haarlem during this time offered the same liberal environment for free thinking and entrepreneurship seen in most of the cities of the Netherlands. Little is known about his childhood except for the general atmosphere and conditions of the Dutch urban landscape during the time of his upbringing. Although most likely born out of wedlock and of humble origins, Hals would probably not have suffered from such a start due to the social climate in the Netherlands at the time.

The first record of Hals as an artist indicates his becoming a member of the Guild of St. Luke of Haarlem in 1610. Membership in this guild acknowledged him as a master. Soon after, he married and fathered two children. Tragically, his wife died only five years later after the birth of the second child. Undeterred, two years later he married again and fathered eight more children with a woman with whom he would remain for the rest of his life. He never left Haarlem and never felt the need to expand his experience beyond his birthplace. Religion never appears in his works, nor does any note of spiritual piety. Not looking inward until old age, Hals also never painted himself. His abundance of offspring and his busy and full life, however, are evidenced by the content of his painting.

Hal’s paintings throughout his early adult life exude happiness, joviality, and conviviality. Though formal in nature, the Banquet of the Officers of the St. George Civic Guard (c. 1616, Frans Hals Museum, Haarlem) displays members with various expressions, which, taken together, express enjoyment and camaraderie.The first large-scale civic guard painting during the Dutch Baroque, it revolutionizes group portraiture by unifying individual likenesses with diagonal lines of drapery and flags, creating a sense of capturing a moment in time. Figures smile or grin, lift their drinking glasses, point or gesture around a large table with plates of mostly eaten food. Lively and vivid, the painting’s execution is done with quick, broad brushstrokes, adding to the sense of immediacy. Indeed, Frans Hals used alla prima (directly on canvas) painting instead of the Renaissance technique of laying on a background layer first. Furthermore, Hals shunned careful preparatory drawings and the tedious methods of his contemporaries. No drawings by Frans Hals have ever been found. The Impressionist Claude Monet would later be influenced by his techniques. 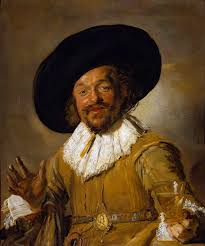 The Merry Drinker (c. 1628-1630, Rijksmuseum, Amsterdam) well represents Hals’ penchant for the brighter side of human nature.The figure, in a large black hat that serves to frame the face, gestures with right hand up, his eyebrows lifted and his mouth ready to respond to the humorous remark just heard. As if caught in a photograph, the figure is caught in action and recorded. Paint is applied quickly and energetically with precision and certainty with visible strokes. A limited palette of yellows and browns defines a bright, warm quality adding to the casual nature of the portrait. For Hals, color substitutes for lines in defining forms.

In later life, Hals suffered from economic deprivation. In 1654, his property was put up for auction in order to placate his creditors. Although working hard and receiving quite a few commissions, he barely kept his head out of the water. His outlook became increasingly somber and morose. In painting Portrait of Rene Descartes (c. 1649, Staten Museum for Kunst, Copenhagen), Hals represents a sense of weariness and solitude. Gone are the gestures of action and vigor. The figure, sedentary and resigned, glances over his shoulder with only enough intellectual and physical energy required for recognition. Similarly, the paint is applied roughly with few colors. Broad blocks of color in the coat and collar show no detail. Only essential elements are painted. Typical of his later work, the Portrait of Rene Descartes indicates a turn toward the inward and away from the gregarious nature of his earlier paintings. As Hals grew old, his vision of humanity became sharper, resulting in a sober tone in his portraits.

Unlike Hals, Rembrandt came into the world among plenty and comfort, though modest in scope. Born in Leiden on July 15, 1606, to a successful miller and a baker’s daughter, his family is alleged to have had between seven and ten children. After studying at a Latin school, he attended the University of Leiden, but soon grew weary of the course of study. After begging his parents for a career in painting, he was allowed an apprenticeship with a history painter, Jacob van Swanenburch, in Leiden. Soon he was off to Amsterdam to study with another history painter, Pieter Lastman. He quickly mastered the art of drawing and painting and, upon returning to Leiden, was already well regarded at the age of twenty-two.

Returning to Amsterdam to work on several commissions, he met Saskia van Uylenburg, who he eventually married. However, tragedy followed Rembrandt. The couple lost three of four children, and within a year of the birth of the fourth child, Saskia died of tuberculosis. Only his son, Titus, remained. Rembrandt afterward took his maidservant, Hendrickje Stoffels, as a mistress and had a child, Cornelia, with her. He never remarried, possibly the result of the extreme heartbreak from the loss of Saskia. Eventually, he saw the death of his beloved son and his loyal mistress. Only his daughter, Cornelia, was by his side when he died in 1669.

Rembrandt, unlike Hals, strove to experience art and life from around the world and throughout history. His financial condition gave him the opportunity to purchase works of art from the Far East, to collect many contemporary works and to buy Renaissance and classical art and sculpture. He had a worldly intellect and took an interest in a variety of subjects such as history and literature. Religion, too, captured Rembrandt’s imagination. Many of his works came from biblical inspiration. Over time, however, as with Hals, Rembrandt changed in outlook and sentiment.

Influenced by Caravagio (1571-1610), the Italian Baroque painter, Rembrandt worked with an imprimatura technique of applying a background and working from dark to light. For example, the early work, The Raising of Lazarus (c. 1630, Los Angeles County Museum of Art, Los Angeles), dramatically focuses light upon the central figure of Christ, who raises his arm above his head as the miracle unfolds. The skillful use of the imprimatura technique enforces the strength of chiaroscuro. The limp, raised body of Lazarus just before consciousness gives drama to a story already well-known. The overall effect of the use of light is one of intense spiritual awakening and hope for the future. Not yet influenced by future tragedies, Rembrandt finished The Raising of Lazarus before marriage and future disappointments. 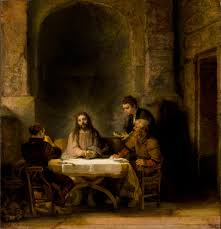 After the death of his wife and children, Rembrandt’s pictures decreased in size. Except for the very large painting, The Night Watch (c. 1642, Rijksmuseum, Amsterdam), he produced many small pictures of biblical scenes. Grave and fatalistic, however, his paintings still used many of the same techniques of light and shadow except more complex and subtle. Supper at Emmaus (c. 1648, Louvre, Paris) presents Christ as an other-worldly figure bathed in an ethereal light, seated before a table surrounded by people cognizant of his godly nature. Light comes filtering through the atmosphere, gently bathing the figures. The background clearly comes through translucent layers to give an effect of space. Drama, during this period, is replaced by Rembrandt with thoughtful emotion. 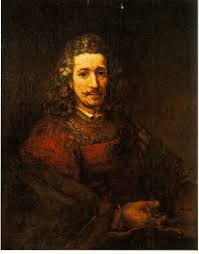 In the last years of Rembrandt’s life, he came back to larger works. Less religious and more secular, his paintings were dominated by intimate portraits. As if fighting against sorrows and old age as well as privations from his earlier extravagant spending, Rembrandt’s painting increased in richness and intensity. Like Hals, he dropped excessive or extraneous details, preferring to specify objects with one large stroke over numerous smaller ones. Man with a Magnifying Glass (c. 1668, Metropolitan Museum of Art, New York), one of his last works, is splashed with brush-strokes of color. Details of the face and hands come from quick daubs of paint adeptly applied over layers of darker colors. No attempt is made to fashion precise details or to labor over particular areas. Only with the Impressionists, around 300 years later, do we see this sort of brushwork.

Rembrandt and Hals shared a common resignation in old age to the foibles and ugliness that humanity can demonstrate. Although Rembrandt always looked inward, he seemed to realize the need for those immediately around him. Hals found less solace in the brighter temperament of the people that used to enamor him and sought something more profound. Although both artists came to use an immediate execution in painting, Hals represented a stinging tinge of sadness, while Rembrandt strove to present an understanding of individual worth.

If you are into modern design such as in architecture, interiors, and furniture, then you probably have heard of Harry Bertoia. Of course, his most commonly seen object is his Diamond Chairs. Originally wire structures that harken to his love of metal work as in sculptures.       The Diamond Chairs come with solid… END_OF_DOCUMENT_TOKEN_TO_BE_REPLACED

Although not meant to detail every modernist floor system, this article will examine a few that I have personal experience with. One of the most admirable features of modernist interiors, in my opinion, is the flooring pervasive during the period of the mid-century.     Although one would suppose by many of the current ideas… END_OF_DOCUMENT_TOKEN_TO_BE_REPLACED

These video and pictures include the final footprint of my tiny new space that will undergo construction in November 2018. The furniture and cabinetry are from IKEA but I may do all the design and construction myself which I will post as a separate article. I am so busy that I may not have time to… END_OF_DOCUMENT_TOKEN_TO_BE_REPLACED

I started to write an article on basic framing for those who are very much into a do it yourself construction of a tiny house. I have learned first hand many of the concepts involved, some by trial and error. In order that walls, openings, windows, and doors are properly fit together, one needs to… END_OF_DOCUMENT_TOKEN_TO_BE_REPLACED