The Death of Caesar depicts the moments after the assassination of Julius Caesar on the Ides of March 44 BC in the Theater of Pompey. Julius Caesar was quite ambitious. After assuming administrative powers of Transalpine Gaul as well as Cisalpine Gaul, Caesar saw an opportunity to increase his fame and fortune when a tribe of barbarians requested transit through the provinces. He set upon them and continued into Gaul, reducing one tribe after another until defeating Vercingetorix at Alesia and subduing all of Gaul. Caesar’s clever use of the written word, as well as his rising fame for his extensive additions to the Republic, led him to cross the Rubicon with his famous remark, “The die is cast!” His direct threat to the Roman Republic, and in particular to the established power of the Senate elite, led to his murder at the base of Pompey’s statue.

The Death of Caesar gives us the image of a fallen Caesar, covered by his bloodstained cloak. The throne is overturned; most of the senators exultantly brandish their swords in declaring liberty and the saving of the Republic. The architecture is meticulously rendered, providing a sense of a grand space and a symbol of the glories of Rome.

Among the academic artists of France, the Roman Republic was a popular subject due to its relation to the political influences at the time. Gerome’s painting was executed during the reign of Napoleon III and the Second Empire. Although the influence of the desire for order led to the election of Napoleon and his eventual dissolution of the National Assembly, class struggle remained as the Emperor established universal suffrage which was seen as a blow to the Republicans because of the conservative leanings of the countryside.

The Death of Caesar gives evidence of what may happen to tyrants who seek to depose the will of a popular body. In effect, the Republican influences of France during this time saw derivation of the power of governors from the consent of the populace. The original French Revolution was still in the minds of many French citizens and its mythology leads to all sorts of graphical representations. Indeed, Louis-Napoléon Bonaparte was compared to Augustus, for instance.

Nevertheless, The Death of Caesar also represents disorder and the actions of an incited mob, bent on the destruction of a symbol of monarchy. Gerome’s agnostic representation leaves the viewer to draw conclusions based upon personal biases. This moment in Roman history begins the end of the Republic and initiates the reign of the Emperors who ruled without peer or restraint. Though the republican sentiment is advocated, the result is defeat and the establishment of dictatorship which produces state control and order. One may see similar circumstances from the July Revolution of 1830 to the February Revolution of 1848 in France.

Vinchon’s Boissy d’Anglas was commission by Louis-Philippe to adorn the Chamber of Deputies in 1830 as a display of his legitimacy to assume power after the July Revolution. Like Caesar Augustus, Louis-Philippe wished to promote the idea that his power was derived from popular consent. Francois Guizot, Minister of the Interior, sought to provide images that displayed a balance between liberal republicanism and the July Monarchy. Mainly a win for the bourgeoisie at the expense of lower economic classes, Guizot, desired to manipulate the narrative of the revolution in terms favorable to Louis-Philippe.

François Antoine de Boissy d’Anglas Standing Up to the Mob, Oil on Canvas, Decoration for the Chamber of Deputies, Auguste Vinchon, 1830.

Boissy d’Anglas was temporary president of the National Convention when confronted by an angry mob who invaded the chamber with the head of the deputy Feraud at the end of a spike in May 1795. As the head waved threateningly before Boissy d’Anglas, he remained calm, saluted the severed head, and continued work after tensions abated. Boissy d’Anglas’ actions were portrayed as defusing the ire of the crowd, which consequently dispersed. This incident came about as the result of widespread misery due to shortages of bread, inflation, monetary devaluation, unemployment, and official corruption. Feraud, a conservative member of the Convention, tried to stop the progress of the disgruntled mass and was shot as the result of mistaken identity. The shooter thought he was a reactionary deputy, Freron. The corpse was beheaded and displayed before Boissy d’Anglas who had assumed his position after the President of the Convention scurried away in fear. 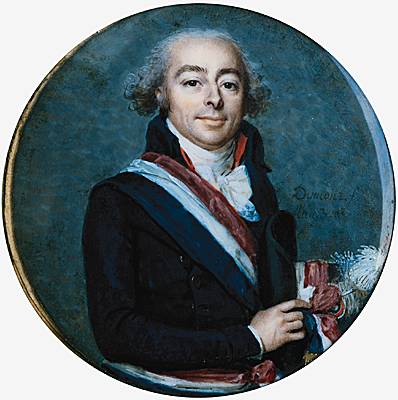 The story of Boissy d’Anglas provided a perfect example of juste milieu, Guizot’s concept of the moderation of liberal and monarchical policies. However, Guizot did not desire images that promoted the notion of noble workers seeking redress of grievances, but those constructions that presented the confrontation of order against the forces of anarchy, while still providing a balance with the ideals of liberal republicanism.

Vinchon’s Boissy d’Anglas tells the story with Boissy d’Anglas seated on a high platform besieged from below in a pyramidal construction from a wild mass of people. Expressions are crazed and irrational, rendered ignoble and incendiary. In the left corner, an agent is shown bribing one of the rioters. The focus of the picture is Boissy d’Anglas, seated calmly and representing the order of the state.

Compared to The Death of Caesar, Boissy d’Anglas does not portray a noble justification for the murder of a person in power. Roman senators sought to preserve the vestiges of Republican rule, while the mob in Boissy d’Anglas attempts to plunge the state into chaos. The figure of Boissy d’Anglas is noble and firm against the backdrop of confusion and turmoil, while the would-be tyrant, Caesar, lays dead and still before the statue of Pompey the Great, Defender of Rome and the Republic.

Gerome’s painting exerts a forceful illusion of reality by its strongly drafted perspective image of architecture and by the expertly rendered foreshortening of Caesar’s body. The eye is eventually drawn back to the spaces in the background by the arched opening and the pillars receding into shadow. Boissy d’Anglas, although it shares some similarities in construction, seems contrived and staged. The lighting is dramatized and less diffuse, falling intensely on Boissy d’Anglas as if in a spotlight. Such strong diagonals as is seen in Vinchon’s work rarely occur naturally and lends to the feeling of a stage play, an effect often seen in history paintings of the time.

Yet Vinchon’s audience, the Chamber of Deputies, was meant to learn a lesson: some responsibility to the public is necessary to maintain order and prevent violence. However, there exists a mob, which can be willingly persuaded to do great damage by the forces of chaos and self-interest. The Death of Caesar shows that violence is sometimes necessary for the defense of noble ideals and to protect the decisions wrought by popular appeal. Obviously, Gerome obtained a wider audience than the ruling elite ensconced in the Chamber of Deputies. Gerome appealed to the Republican leanings of French society, even in the time of the Second Empire.

If you are into modern design such as in architecture, interiors, and furniture, then you probably have heard of Harry Bertoia. Of course, his most commonly seen object is his Diamond Chairs. Originally wire structures that harken to his love of metal work as in sculptures.       The Diamond Chairs come with solid… END_OF_DOCUMENT_TOKEN_TO_BE_REPLACED

Although not meant to detail every modernist floor system, this article will examine a few that I have personal experience with. One of the most admirable features of modernist interiors, in my opinion, is the flooring pervasive during the period of the mid-century.     Although one would suppose by many of the current ideas… END_OF_DOCUMENT_TOKEN_TO_BE_REPLACED