I have always enjoyed early American art and especially love the paintings of that artistic brood named Peale. Among all the great works of art throughout the history of western civilization, some of the works by the father, Charles Wilson Peale and his sons, Rembrandt, Raphaelle, Rubens, and Titian remain distinct in my visual memory. This list of his sons, who were named after artists and scientists, is not at all comprehensive since he had eighteen children which included three daughters also named after artists. Nevertheless, this little missive concerns some of my most memorable pictures that came out of the Peale family and not an extensive history. For information about the family, follow this link. Just as a side note, his daughters were named after three accomplished female artists all of whom I most admire for their skill.

To begin with, three Charles Wilson Peale pictures come to mind when remembering his work. 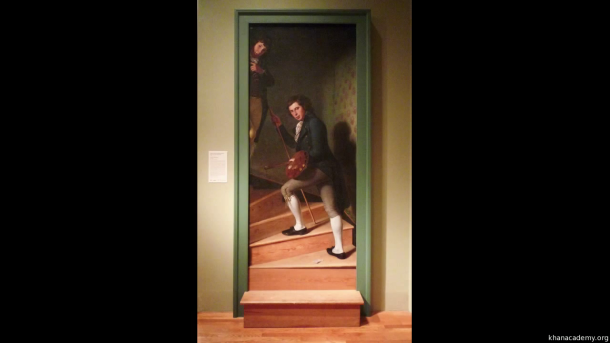 The Staircase Group, besides the amusing nature of the composition, strikes a bit of the showman coming out in CW Peale, as well as a bit of modernity. Charles, as we shall see in the next picture, opened a natural history museum in Philadelphia and was keenly in tune with the whole notion of public display and attention. Because of his interest in science and the latest advancements in knowledge and technology, he was not averse to acting in an original way.

Here in this picture, we see two of his sons ascending a staircase, one twisting around to look at us, the other turning back to sneak a peak from around the door frame. The most distinctive and noticeable features of this painting are the real stair step that is perfectly matched with the painted steps and the frame of the picture made to look like an actual door frame, adding to the illusion. I should mention that this picture was created lifesized.

The dynamics of the composition show some of the creativity and wit of Charles Wilson Peale. Certain objects such as the blobs of paint on the palette and the buttons on the twisting figure’s jacket, lead the eye upward. For further emphasis, his son, Raphaelle’s mahl points the way upward and to Titian’s tilted face.

Another clever aspect of The Staircase Group is found in the shadows that seem to be thrown by the door frame but which are actually painted on canvas. The knee of Titian, the figure further up the stairs, points toward us and the shadow of the door frame falls as if the frame is touching him, further increasing the trompe l’oeil effect. 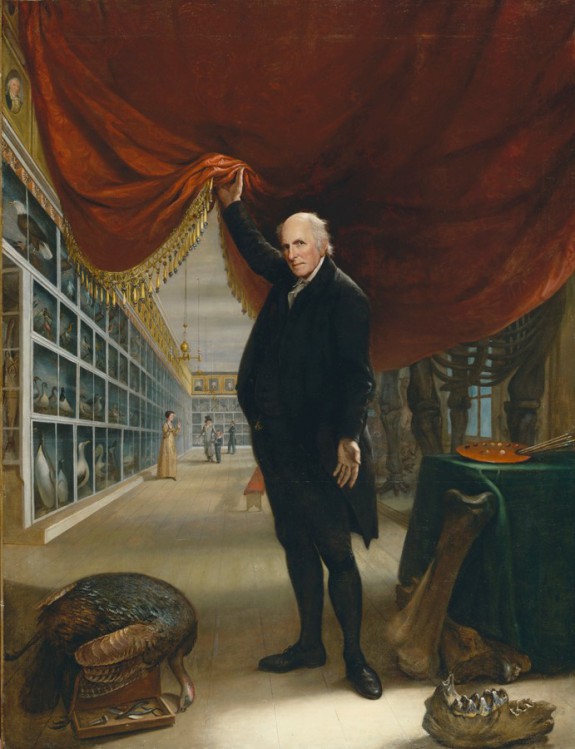 The Artist in His Museum, Oil on Canvas, Pennsylvania Academy of Fine Arts, Charles Wilson Peale, 1822.

From the above, The Artist in His Museum, the unobscure observation that the elder Peale supports many interests including natural history, taxidermy, painting, and paleontology easily develop in one’s analysis. Indeed, this time in American history saw a number of multi-talented individuals such as Benjamin Franklin and Samuel FB Morse,  who not only painted but gave us the single wire telegraph and code. Morse’s most famous pictures are probably the Gallery of the Louvre and another painting The House of Representatives. 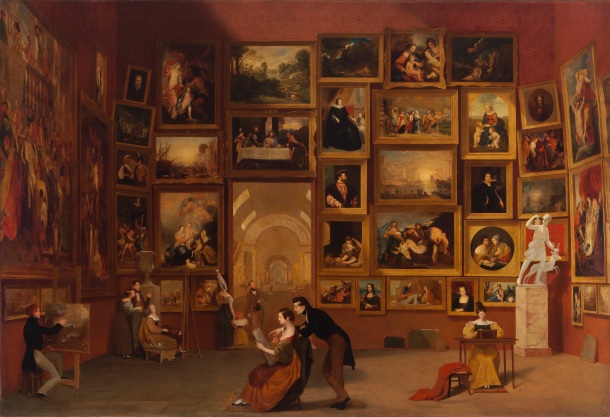 Gallery of the Louvre, Oil on Canvas, Samuel FB Morse, 1833. 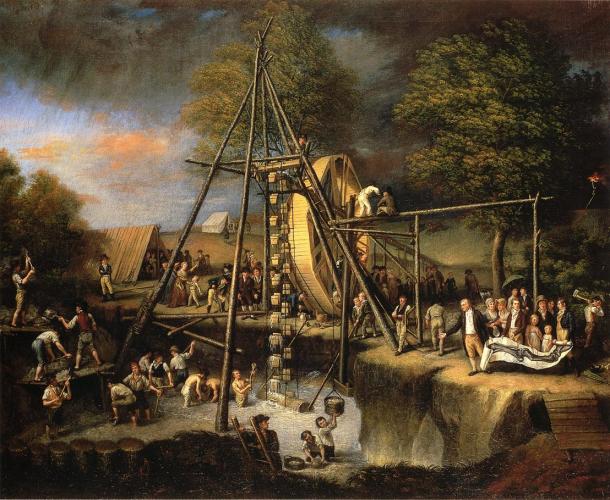 The Exhumation of the Mastodon, Oil on Canvas, Charles Wilson Peale, 1806.

I’ve always enjoyed The Exhumation of the Mastodon probably because the subject is a large open space with a considerable number of figures and large constructions among a beehive of activity. At first viewing, the design of the image seems awkward until one realizes the degree of complexity attempted here. Peale is framed on the right with logs from the extraction setup. He is further emphasized holding the end of a large illustration of what appears to be leg bones of the mastodon. This illustration spans a group of individuals who we recognize as his family and who he must be pointing out the details of the exhumation. The picture finds balance in the pyramidal form of lumber in the center of the picture which also interacts with the two lines of figures which are engaged in the exhumation and those observing. The A-framed shelter to the left, which mimics the pyramidal form, is repeated in the white tent further in the background while the pale blue of the water in the excavation repeats in the patch of visible sky. A series of vertical lines cross the canvas in the form of logs, the water scoops, and then men at different elevations on the left. The large wheel, which might otherwise dominate the image, is mitigated by the effects of the verticals. The Exhumation is a sophisticated picture.

Rembrandt Peale, probably best known for his pictures of George Washington, painted one of my favorite images; that is his painting of his brother Rubens Peale.

Rembrandt Peale was extremely talented and painted figures such as Washington and Napoleon. The above image of his brother, Rubens, was created when Rembrandt was just 17 and shows remarkable skill in execution. It also shows a curiosity that goes beyond just painting. The geranium in the picture was rare at this time in North America. Of course, Rubens Peale possibly finds this exotic plant of such great interest as to share the spotlight.

How does one emphasize a plant without overpowering a person or a person without dominating a plant? Well, Rembrandt does it by light and shadow plus the charming element of having a leaf of the plant lovingly touch the brow of Rubens and he, in turn, grasping the plant’s pot so gently. The geranium seems to have the sway here since his brother slightly leans his head to one side. The subtle nature of this portrait and the sensitive composition make this a masterpiece in my mind. 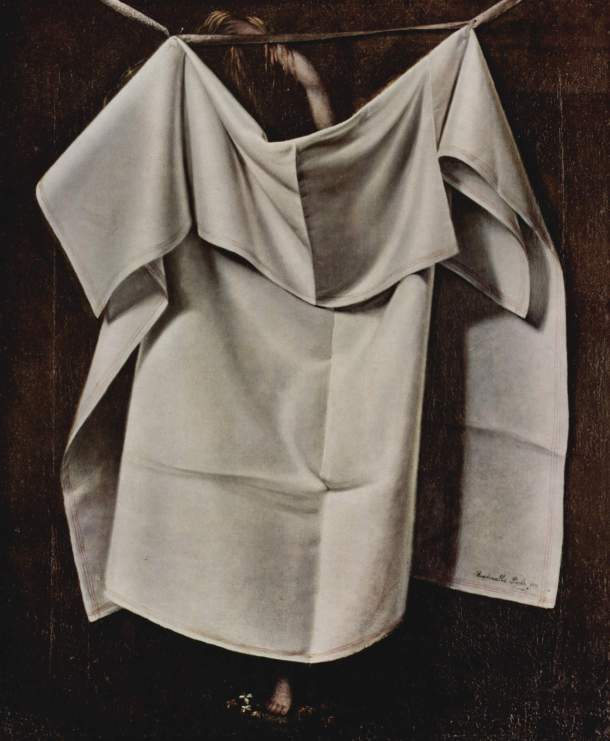 After the Bath, also known as Venus Rising from the Sea—A Deception, is a marvelous work of trompe l’oeil by Raphaelle Peale. The misnomer “After the Bath” does not accurately describe this picture since it has nothing to do with drying off after a bath. A careful look should tell you that this is a little bit of humor that also might carry a criticism of the Puritan values in America at the time. Rather than to blatantly tell you the true subject of this picture, I will provide you a link here if you get stuck in trying to figure it out.

I saw this picture at a very early age and it gave me the lesson that art is all about fooling the eye and the mind. Besides this profound thought, I simply found a great interest in the amazing still-life images that Raphaelle Peale created in his short stay on this earth. 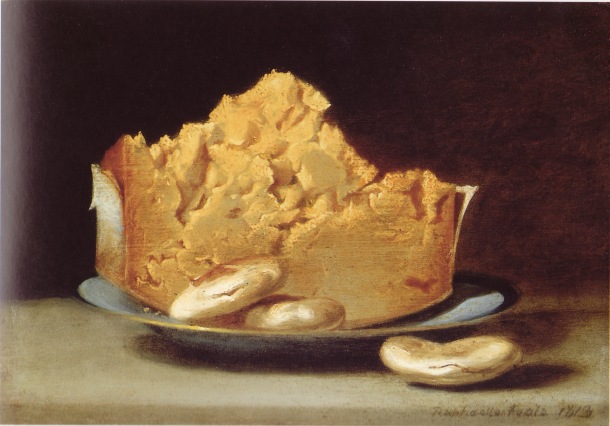 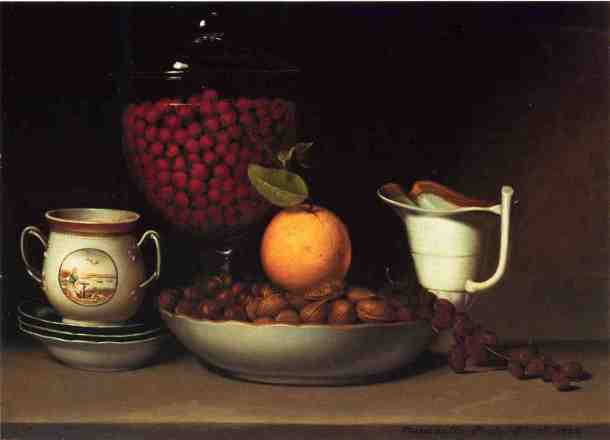 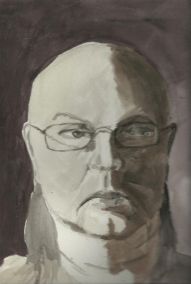 If you are into modern design such as in architecture, interiors, and furniture, then you probably have heard of Harry Bertoia. Of course, his most commonly seen object is his Diamond Chairs. Originally wire structures that harken to his love of metal work as in sculptures.       The Diamond Chairs come with solid… END_OF_DOCUMENT_TOKEN_TO_BE_REPLACED

Although not meant to detail every modernist floor system, this article will examine a few that I have personal experience with. One of the most admirable features of modernist interiors, in my opinion, is the flooring pervasive during the period of the mid-century.     Although one would suppose by many of the current ideas… END_OF_DOCUMENT_TOKEN_TO_BE_REPLACED 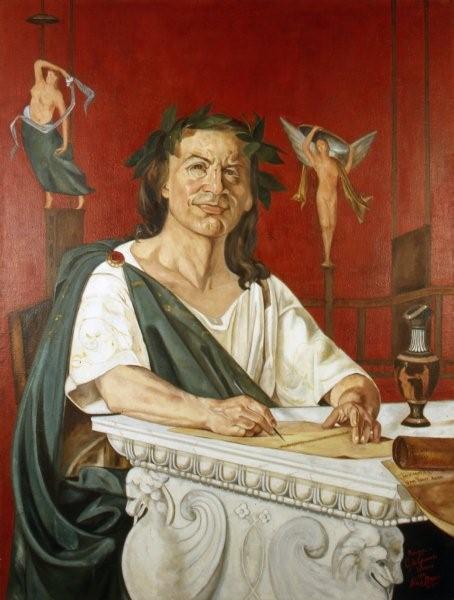