This poem by Edgar Allen Poe always brings to me the memory of Shakespeare’s Hamlet where he tells Horatio “Alas, Poor Yorick. I knew him, Horatio.” And he continues, “I knew him, Horatio, a fellow of infinite jest, of most excellent fancy. He hath borne me on his back a thousand times, and now, how abhorred in my imagination it is! My gorge rises at it. Here hung those lips that I have kissed I know not how oft. —Where be your gibes now? Your gambols?”

Alas Poor Yorick, Oil on Canvas, Painted When I was a Teenager.

I wonder if Poe had the seeds of Shakespeare in his mind when he created The Conqueror Worm. 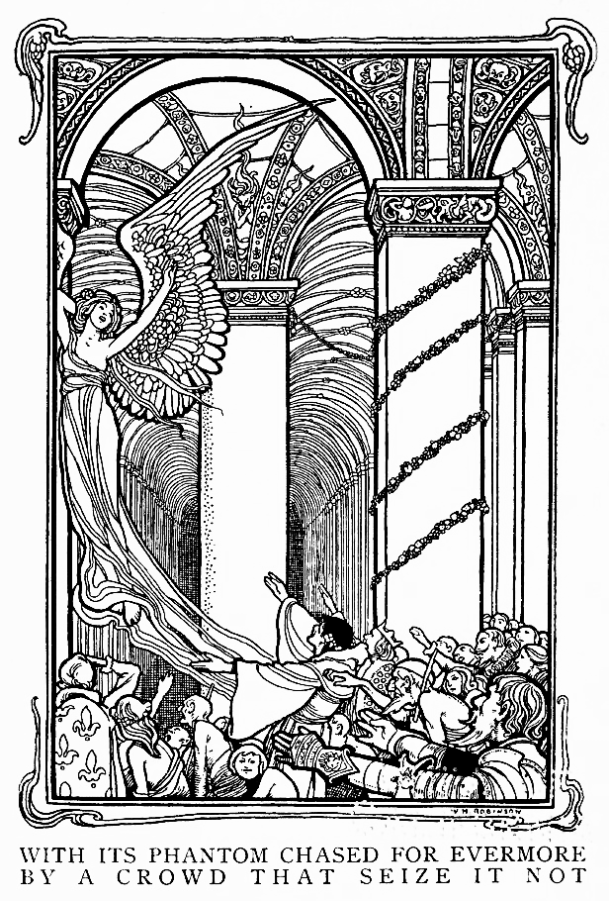 Illustration for The Conqueror Worm, Illustrated by W. Heath Robinson. 1900.

Lo! ’t is a gala night
Within the lonesome latter years!
An angel throng, bewinged, bedight
In veils, and drowned in tears,
Sit in a theatre, to see
A play of hopes and fears,
While the orchestra breathes fitfully
The music of the spheres.

Mimes, in the form of God on high,
Mutter and mumble low,
And hither and thither fly—
Mere puppets they, who come and go
At bidding of vast formless things
That shift the scenery to and fro,
Flapping from out their Condor wings
Invisible Wo!

That motley drama—oh, be sure
It shall not be forgot!
With its Phantom chased for evermore
By a crowd that seize it not,
Through a circle that ever returneth in
To the self-same spot,
And much of Madness, and more of Sin,
And Horror the soul of the plot.

But see, amid the mimic rout,
A crawling shape intrude!
A blood-red thing that writhes from out
The scenic solitude!
It writhes!—it writhes!—with mortal pangs
The mimes become its food,
And seraphs sob at vermin fangs
In human gore imbued.

Out—out are the lights—out all!
And, over each quivering form,
The curtain, a funeral pall,
Comes down with the rush of a storm,
While the angels, all pallid and wan,
Uprising, unveiling, affirm
That the play is the tragedy, “Man,”
And its hero, the Conqueror Worm.

Note: I should have also mentioned the reference in this poem to life as a stage, of course, appears in Shakespeare as well. This appears in As You Like It, Act II, Scene VII:

All the world’s a stage,
And all the men and women merely players;
They have their exits and their entrances…

If you are into modern design such as in architecture, interiors, and furniture, then you probably have heard of Harry Bertoia. Of course, his most commonly seen object is his Diamond Chairs. Originally wire structures that harken to his love of metal work as in sculptures.       The Diamond Chairs come with solid… END_OF_DOCUMENT_TOKEN_TO_BE_REPLACED

Although not meant to detail every modernist floor system, this article will examine a few that I have personal experience with. One of the most admirable features of modernist interiors, in my opinion, is the flooring pervasive during the period of the mid-century.     Although one would suppose by many of the current ideas… END_OF_DOCUMENT_TOKEN_TO_BE_REPLACED

These video and pictures include the final footprint of my tiny new space that will undergo construction in November 2018. The furniture and cabinetry are from IKEA but I may do all the design and construction myself which I will post as a separate article. I am so busy that I may not have time to… END_OF_DOCUMENT_TOKEN_TO_BE_REPLACED

I started to write an article on basic framing for those who are very much into a do it yourself construction of a tiny house. I have learned first hand many of the concepts involved, some by trial and error. In order that walls, openings, windows, and doors are properly fit together, one needs to… END_OF_DOCUMENT_TOKEN_TO_BE_REPLACED