Normally one does not think of Maxfield Parrish as a mid-century artist. He was born in 1870 and died in 1966. However, during the decades of the 60s and 70s, his resurgence was remarkable. His pictures, with their breathtaking views and their mythical characters, had a strong influence on those looking for the idyllic. Because of the otherworldliness of his color schemes and subject matter, his images presented a feeling of a dream, something beyond ordinary reality. During this period, it was not uncommon to find a poster bearing a Parrish image pinned to the wall of a college dormitory room or hanging as a framed work in the den of a suburban house. In fact, at one time a quarter of American households had a Parrish print. Surrealism was popular and, though Parrish was not by any means a surrealist, his work, due in large part to their luminous nature, carried the quality of portraying a world not quite our own, an enhanced version, if you will.

Of course, Parrish did not fit the bill as an abstract expressionist or any sort of modern artist and especially since he was classified as an illustrator, making images for commercial promotion, the critics could not find greater revulsion. Consequently, the elite considered him as they did any other artist popular with the public and producing realistic works. Parrish sized them up fairly well when he wrote, “There are countless artists whose shoes I am not worthy to polish, whose prints would not pay the printer. The question of judgment is a puzzling one.”

Maxfield Parrish, the son of Stephen Parrish an accomplished etcher and painter, received encouragement and unique experiences from both his parents. Maxfield benefited from the travel of his father throughout Europe who was gathering material for later etching. A product of Philadelphia, Pennsylvania, the Philadelphia Academy of Fine Arts and travel with both his parents, as well as later on his own, Parrish especially benefited from experiences in Paris, Italy and the American Southwest where he received the greatest influence for his landscapes and backgrounds.

Maxfield Parrish was vastly successful as an illustrator and created images for large, well-known companies.

By the 1920s Parrish turned away from illustration and began painting “ars gratia artis” or works produced for their own intrinsic value. He beget a multitude of pictures of fantastical images of androgynous individuals in phantasmagoric environments.

Daybreak, Oil on Canvas, 1922. This is probably the most popular print in America during the 20th century.

Lady Ursula Kneeling Before Pomp Debile from The Knave of Hearts, Oil on Canvas, 1924.

Eventually, in the 1930s, Parrish settled predominately on landscapes:

In the above landscape pictures, as in most of his landscapes, one more readily envisages the techniques he used in producing them. Like the artists of the Renaissance, he worked in a monochrome underneath and gradually layered other transparent colors on top, which produced his stunning luminosity, so hard to reproduce in books and other media. Yet just as a printer combines yellow, magenta, and cyan, Parrish would start, say a tree, in blue or a cyan color and successively tint the tree with the other colors. In between the layers, he would apply a coat of varnish to prevent any sort of mixing. After the varnish dried, he would prepare the surface with a bit of scuffing with a pumice stone. The effect not only resulted in a glossy luminescence on the surface but an exquisite level of detail and subtilty in the variation of light and shadow as well as atmospheric perspective. Because, he usually began his pictures with white and blue and the intensity that resulted, his blue became known as “Parrish blue”.

Because of the requirement of allowing the different layers to dry before applying varnish or a layer of transparent color, the production of a work took a great deal of time. Parrish managed to output a large number of pictures by painting several at any given time. 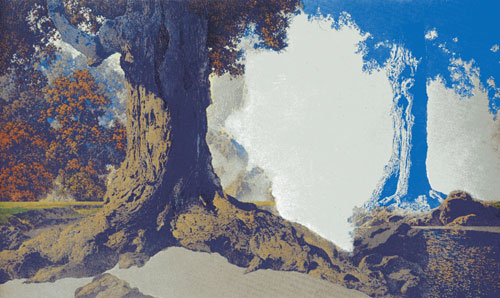 An unfinished work that Parrish was working at the time of his death. Notice his use of a blue, monochrome as the base of his forms.

Maxfield Parrish also was keenly interested in classical proportions in art such as what are called the Golden Section or Ratio.

(Art Terms) the proportion of the two divisions of a straight line or the two dimensions of a plane figure such that the smaller is to the larger as the larger is to the sum of the two. If the sides of a rectangle are in this proportion and a square is constructed internally on the shorter side, the rectangle that remains will also have sides in the same proportion. Compare golden ratio

He used photography extensively in his work and operated his own equipment and darkroom. He would project images onto canvas in order draw their form. Sometimes he would include many photographs and projected images in one picture. Rarely, if not at all, did he draw or paint from live models. He was so unique in his techniques, that a study of them could fill a book on just this subject.

Although an article about Maxfield Parrish might seem out of place on a website about modernism, he maintained a large presence in the 20th century in America and experimented with techniques and methods worthy of the time. He continues to periodically emerge and did so during the mid-century, especially in terms of prints and posters. Furthermore, his popularity among the general public has never declined or diminished by elitist criticism. His images may outlast many of those who call themselves by one “ism” or another during the 20th century.

One thought on “The Beautiful View of Maxfield Parrish”

If you are into modern design such as in architecture, interiors, and furniture, then you probably have heard of Harry Bertoia. Of course, his most commonly seen object is his Diamond Chairs. Originally wire structures that harken to his love of metal work as in sculptures.       The Diamond Chairs come with solid… END_OF_DOCUMENT_TOKEN_TO_BE_REPLACED

Although not meant to detail every modernist floor system, this article will examine a few that I have personal experience with. One of the most admirable features of modernist interiors, in my opinion, is the flooring pervasive during the period of the mid-century.     Although one would suppose by many of the current ideas… END_OF_DOCUMENT_TOKEN_TO_BE_REPLACED