I am currently undertaking another reading of David Hochney’s Secret Knowledge, Rediscovering the Lost Techniques of the Old Masters

, a book that puts forth that optical devices were widely used in the production of art work going back to the Renaissance. He introduces us to drawings and a painting by Ingres, a painting by Bronzino, and one by Hans Holbein, to name just a few, to point out visual and mechanical characteristics to support his hypothesis. He also provides us with his experience in using a device that has been known for centuries, the camera lucida, showing a progression of drawings he has made over time using this device.

One element of his theorem is based upon the level of detail which some paintings have that would be difficult to produce by drafting by hand without any other aid except hand to eye coordination. He, for instance, refers to the Portrait of Madame Leblanc by Ingres and the intricate detail of her wardrobe:

He points in particular to the intricate and precise rendering of the drapery overflowing the arm of the chair as evidence of the use of optical projection in capturing such exquisite technical rendering. As impressive as this detail is, one easily sees equal control over other aspects of the painting such as the lace on the gown, as well as the the chain around Madame Leblanc’s neck. Except for the flowers in the background, the entire picture is executed in the same precise manner.

The question then arises, “Can such details be painted so explicitly without the aid of an optical device?” I think the answer is yes. Careful observation with a persistent attitude that commits one to accurate representations can produce such results. One of Ingres’ artistic selling points is his adherence to realism. Here, like a musical virtuoso playing a very difficult concerto, Ingres displays his amazing facility with materials. This is one of Ingres signatures, especially with his portraits.

(Notice the patterns on the furniture and shawl.)

Besides the fact that there are well-worn methods for reproducing visual details in artwork, Hockney’s evidence does not stand upon strong ground. These Ingres paintings were created before the advent of the camera when use of optical assistance to artwork becomes evident. Artists such as Thomas Eakins began using photography as part of the painting process. However, he also used extensive perspective drawings to work towards a finished representation of reality.

Bronzino’s Eleonora di Toledo col figlio Giovanni is also given as an example of fine detail in drapery as a possible example of the use of optics as an aid. 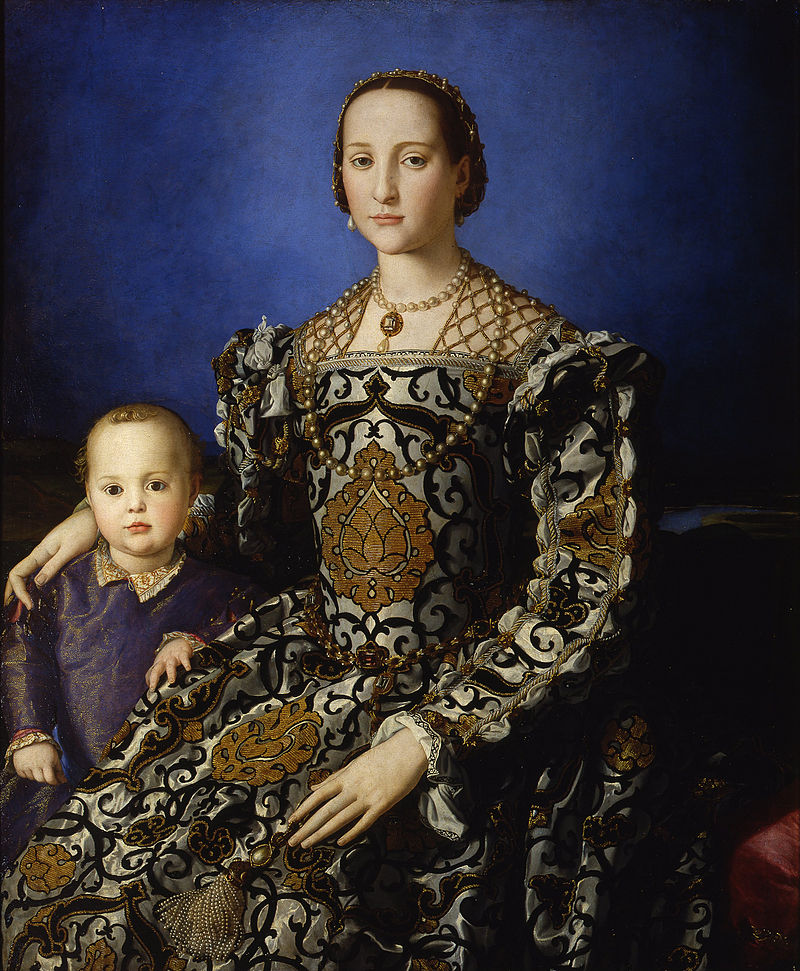 Due to the exacting methods of painting at the time of the Renaissance, recreating such a pattern from reality is not out of the question.

Is it possible that Hockney in part is applying 20th century thinking to other periods? Art school today emphasizes different approaches to painting. Many do not require accurate drawing or painting, ignoring the students competency in realist renderings or local color. Pupils can exist entirely in a world of abstraction without an expert knowledge of perspective or figurative drawing. Many people who attended university art school with myself would not last one minute in centers of instruction or apprenticeship in the past. Quite a few of my professors were without the ability of detailed draftsmanship. Absolutely no instruction was given on drapery or landscapes. Although I enjoy Hockney’s work immensely, I would not compare his abilities in this area to say, Jacque Louis David. If one is not inculcated with the notion of precision in drawing, then it’s possible to wonder over the work of artists who had this concept as entirely necessary or at least who found it essential and worked tirelessly to come to this ability.

One must also realize that not all support is canvas. What of the use of fresco? Undoubtedly, artists did not use and could not use projection to decorate the walls of the myriad and innumerable structures throughout the world. All of these artists also created drawings and works in other media. The use of optical projection seems entirely unnecessary compared to the training and talent of artists throughout western art traditions.

More and conclusive evidence is needed to verify David Hockney’s proposal that optics were used widely at any time before the advent of photography based upon exacting renderings in pictures. Of course, this is only a part of the foundation of his thesis and I will examine the other parts in the near future. For instance, his detailed look at drawings that seem to have no groping for lines.

If you wish a further look into this controversy, follow this link.

One thought on “On David Hockney’s Secret Knowledge”

If you are into modern design such as in architecture, interiors, and furniture, then you probably have heard of Harry Bertoia. Of course, his most commonly seen object is his Diamond Chairs. Originally wire structures that harken to his love of metal work as in sculptures.       The Diamond Chairs come with solid… END_OF_DOCUMENT_TOKEN_TO_BE_REPLACED

Although not meant to detail every modernist floor system, this article will examine a few that I have personal experience with. One of the most admirable features of modernist interiors, in my opinion, is the flooring pervasive during the period of the mid-century.     Although one would suppose by many of the current ideas… END_OF_DOCUMENT_TOKEN_TO_BE_REPLACED