The famous Cardinal Albani commissioned Anton Raphael Mengs to paint the Parnassus Ceiling for the Villa Albani in Rome. The Villa Albani, not particularly suited as a permanent residence or for hosting guests, was a showcase for Cardinal Albani’s rich and extensive collection of classical antiquities. Albani dealt in buying and selling ancient objects from Rome and Greece, and along with cataloging his collection, he used the Villa to present an impressive face to potential connoisseurs by crowding it with his large collection. This is why he desired Mengs to paint the Parnassus centrally on the ceiling of his villa and whet the appetite of those inspired to purchase classic objects.

The Parnassus provides evidence of the commercial interests of Albani. The central figure, Apollo, bears an idealized representation of Albani’s face. The other figures in the picture are representations of the various women who occupied Albani’s time and interests. The Muses, led by Apollo, who also is a patron of the arts, are positioned to the left and right of the sun god and denoted with their various identifying attributes. In particular, the face of Clio resembles his wife, Margarita, and Mnemosyne features the likeness of Vittorucchia, daughter of Countess Ceroffini. This picture affords an advertisement of the Cardinal’s classical, mercantile ambitions. 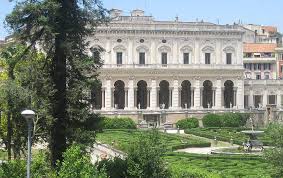 The Apotheosis of Homer by John Flaxman and Josiah Wedgwood exemplifies a modern concept of designer goods. With the image lifted from an antique vase and provided with a new narrative, the concept of art comes under question. This may be surprising to those who have a limited view, confined to the notion of modernity and beyond, to those who thought such questions began with the urinal marked with R. Mutt by Marcel Duchamp. The Apotheosis does not contain qualities that would cause one to mistake it for an ancient object. The vase is a different material and technique than used by Attic vase makers, for instance. Yet is it different enough to qualify as an original work of art? Does the “artist” become an artisan or craftsman? Commercial designers today think of themselves as artists largely based upon the notion that, although an object is reproduced many times, the original concept sprung from an individual or group of designers. Truthfully, no objective definition of art or artist exists which would satisfy the arguments of most everyone.

Flaxman and Wedgwood worked cooperatively to develop commercially successful products. Flaxman provided the designs with input from Wedgwood and Wedgwood sought to understand the marketing and technical aspects necessary to produce and sell the merchandise. Together, they succeeded in providing an object that their target audience would buy.

The Fertilization of Egypt, Etching, William Blake after a Sketch by Henry Fuseli 1791

The Fertilization of Egypt by Henry Fuseli explores the star Sirius rising to inform ancient Egyptians of the coming inundation of the Nile. Astride waters made to flow by a god who throws lightning from his outstretched arms, the god Anubis reaches upward to the bright star calling forth the fertility that furnishes the well-being of Egypt. Here allegorically, the powerful forces of nature, astronomical and electrical, have profound effects on the daily lives of individuals and nations.

As public entertainment electricity delighted and awed audiences during the time of Fuseli. Some found religious and spiritual explanations for its qualities. However, many of Fuseli’s contemporaries postulated that electricity provided a superb opportunity to discover fundamental properties of nature.

If you are into modern design such as in architecture, interiors, and furniture, then you probably have heard of Harry Bertoia. Of course, his most commonly seen object is his Diamond Chairs. Originally wire structures that harken to his love of metal work as in sculptures.       The Diamond Chairs come with solid… END_OF_DOCUMENT_TOKEN_TO_BE_REPLACED

Although not meant to detail every modernist floor system, this article will examine a few that I have personal experience with. One of the most admirable features of modernist interiors, in my opinion, is the flooring pervasive during the period of the mid-century.     Although one would suppose by many of the current ideas… END_OF_DOCUMENT_TOKEN_TO_BE_REPLACED