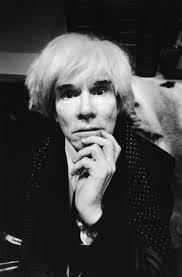 When doing an Internet search for “Andy Warhol” the resultant list is most likely to include many images of the artist himself. Much like Salvador Dali, Andy Warhol (1928-87) was addicted to media attention, even if that attention required perverse or bizarre behavior. This is a pattern followed today of the insane, stupid (or combination of the two) artist who bounces around the media saying strange or incomprehensible things that attest to their genius or timeliness. One is never quite sure whether the artist is described by one or both of these attributes or just very skilled in painting a money-making picture before the art critics and the trend following public. 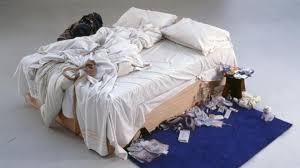 Remembering works of artists that compare to some of the shenanigans of Andy Warhol is not difficult. The Italian artist, Piero Manzoni and his tin of excrement, easily comes to mind, or the nonsensical works of the British artist Tracey Emin, both artists taking a simple-minded idea, such as My Bed, and providing mountains of confused discussion. I classify these sorts of artists as entertainers rather than fine artists, at least until they can present a commission that supplies more than a statement that has little intellectual longevity. The questioning as to what is art or not came with R. Mutt by Marcel Duchamp and examined at length to such a mind-numbing point, like a Gregorian chant that never ends. 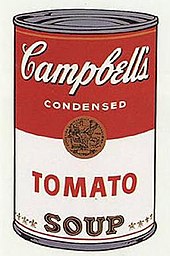 So the question arises as to how to classify Andy Warhol. The problem presents itself, now that the artist is dead and no longer able to entertain, as to the value of his work. Obviously, Warhol’s artwork, served up without great expectations, digests easily, without heartburn. It does not challenge us or give more than what is displayed. I’ve never heard of someone crying over or moved deeply by a Warhol production. Best known for his silk screens, he made images of celebrities with cartoon like colors, of tins of soup, of traffic accidents, and of a few other concepts. I’ve always wondered what value or presence his pictures of celebrities will display to a time when the fame of the subjects die out or knowledge of these individuals becomes obscure. This fate imposes itself on the works of some modern artists already, Jasper Johns and Rauschenberg come to mind, who maintain a presence based on historical, rather than artistic significance. Not celebrity obsessed like most Americans, his images, beyond the composite construction, has little meaning for me in terms of the subject. I have heard of Marilyn Monroe and Elvis Presley, but they have nothing to tell me. Some subjects are unknown to me.

At any rate, any question regarding the value of Warhol’s art come from a similar point of questioning Pop Art and Modern Art overall, which epitomizes the essence of fruitlessness. Art can not be defined, period. The most sane, lucid tenet, from a personal point of view, is stated as, “Art is what I say it is.” Nevertheless, art also depends upon what the viewer looks for in the creations of artists. This is very individual as well. If I could care less about the level of ideas embedded in a piece of art, then no other musings by numerous art critics and historians means anything. This is not a nihilist concept, but an unfortunate truth. This sticks in the throat of many people because, unlike science or history, for instance, art craps on reality’s back. Art communicates, at best, an oblique feeling or impression of what an artist perceives, imagines or believes. This is only of value when the viewer experiences something compelling when considering the end product of the effort or the effort itself. Hollywood may think that they dish out “truth”, yet their attempts, contrived and artificial, pales in comparison to reality.

To most of the people who have heard of him, he is a name handed down from a distant museum-culture, stuck to a memorable face: a cashiered Latin teacher in a pale fiber wig, the guy who paints soup cans and knows all the movie stars. To a smaller but international public, he is the last of the truly successful social portraitists, climbing from face to face in a silent delirium of snobbery, a man so interested in elites that he has his own society magazine. But Warhol has never been a popular artist in the sense that Andrew Wyeth is or Sir Edwin Landseer was. That kind of popularity entails being seen as a normal (and hence, exemplary) person from whom extraordinary things emerge.

Hughes did not think much of Andy Warhol. In fact, he called Warhol one of the stupidest persons he ever met. This subject is the thesis of an article in the Huffington Post.

One large problem with Warhol’s so-called work is the factory like conditions he used in producing them. He would contract outside printing of his artwork, never seeing them, and simply sign them when they arrived from the printer. Such methodology blurs the line between original artwork and what can be authenticated as a Warhol. It also increased the number of Warhol’s to around one hundred thousand or so. Prices remain high now, but what of the future? Of course, the innumerable Warhol’s leads to a great temptation for fakers and forgers.

I don’t know where to go with Andy Warhol. No central idea or ideal shines forth. Personally, his pictures administers very little pleasure to my eyes. The concepts are shallow or insipid. The colors show no extraordinary combinations that produce interest or compulsion to contemplate. The compositions are lackluster. His portraits tell us absolutely nothing and certainly a far cry from Velasquez and Rembrandt, or Picasso, for instance. The only personally interesting fact about Warhol is his interest in the Amiga computer and his prescience regarding digit art. Yet with Warhol, one always considers that possibly one is simply missing something.

If you are into modern design such as in architecture, interiors, and furniture, then you probably have heard of Harry Bertoia. Of course, his most commonly seen object is his Diamond Chairs. Originally wire structures that harken to his love of metal work as in sculptures.       The Diamond Chairs come with solid… END_OF_DOCUMENT_TOKEN_TO_BE_REPLACED

Although not meant to detail every modernist floor system, this article will examine a few that I have personal experience with. One of the most admirable features of modernist interiors, in my opinion, is the flooring pervasive during the period of the mid-century.     Although one would suppose by many of the current ideas… END_OF_DOCUMENT_TOKEN_TO_BE_REPLACED