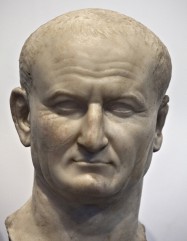 Jewish history astonishes those who do not realize the length and scale of its scope. One might begin studying Moses leading his people out of Egypt in what is called the Exodus, receiving the Commandments, and wandering in the desert. Yet Jews have wandered as a result of oppression from ancient times to the present. Vespasian, the Roman Emperor, known for the Colosseum, and his son Titus destroyed and looted the Temple in Jerusalem and used the spoils to pay for the massive arena’s construction, as Romans were want to do.[1] We also know of Ester who saved the Jews from the wrath of a Persian antagonist out to destroy them, and from which the Jewish holiday Purim is derived. Catholic Spain, in a drive against the Jews during the Inquisition, could not accept conversos without the constant suspicion that they truly clung to Judaism. When Pope Urban II gave a speech at the Council of Clermont on November 27, 1095 which began the Crusades with the call, “Deus vult!” (God wills it), Christians in their zeal murdered thousands of Jews on their way to glory in the Holy Land. Not long ago in the past century, Nazis methodically, mechanically annihilated millions of Jews in deference to bigotries of the past.  How, beyond all possibilities, did Judaism survive? As in the story of the Exodus, the Jews wandered. They left Spain for North Africa and the Middle East. They left Germany for Poland during the pogroms that came with the Crusades. They survived by spreading far and wide while remembering where they had traveled and the trials overcome. In America, they came early in small numbers, but in greater multitudes in the 19th and 20th centuries.

America was different. It held the promise of religious liberty. Nevertheless, the Jewish population in the United States at the time of the American Revolution remained relatively small, around 2,000 people mainly in New York, Charleston, Boston and Philadelphia. George Washington wrote to a Jewish congregation in Newport, Rhode Island in 1790 that he hoped that  Jews continued to gather the goodwill of the citizens of the United States.

Washington wrote the congregation in 1790:

“… the Government of the United States … gives to bigotry no sanction, to persecution no assistance. … May the children of the Stock of Abraham, who dwell in this land, continue to merit and enjoy the good will of the other Inhabitants; while every one shall sit in safety under his own vine and figtree, and there shall be none to make him afraid. May the father of all mercies scatter light and not darkness in our paths, and make us all in our several vocations useful here, and in his own due time and way everlastingly happy.”

By the time of the Civil War around 150,000 Jews resided in the country. Mainly these were immigrants from Germany, and many served on both sides as generals, colonels, and even in cabinet posts, accentuating the penchant for Jews in America to assimilate into American society. Even so, some anti-Semitism existed, with some states attempting to limit Jewish political participation. However, measures taken against Jews never reached anywhere near the level of vitriol experienced by Jews in large parts of Europe and Russia. In fact, many Jews in the United States achieved considerable success in business and politics. Many well known commercial names such as Sears and Roebuck, Lehman Brothers, and Goldman Sachs were the result of Jewish entrepreneurs and the emphasis on assimilation by Jewish leaders such as Jacob Schiff.

The greatest influx of Jews came from Eastern Europe and Russia in the early 20th Century due to people fleeing extreme anti-Semitism and seeking freedom and economic opportunity. Of course, the rise of fascism in Germany led large numbers to seek asylum in America.

In spite of some resistance by the Christian majority, Jews in America have enjoyed success and spiritual freedom by blending into the fabric of society. This enlightened view has led them to the highest pinnacles of American government, business, and society, with a strong important voice, respected and influential.

Whiston, William. (1737) The Works of Flavius Josephus. Retrieved from: http://www.sacred-texts.com/jud/josephus/index.htm.

If you are into modern design such as in architecture, interiors, and furniture, then you probably have heard of Harry Bertoia. Of course, his most commonly seen object is his Diamond Chairs. Originally wire structures that harken to his love of metal work as in sculptures.       The Diamond Chairs come with solid… END_OF_DOCUMENT_TOKEN_TO_BE_REPLACED

Although not meant to detail every modernist floor system, this article will examine a few that I have personal experience with. One of the most admirable features of modernist interiors, in my opinion, is the flooring pervasive during the period of the mid-century.     Although one would suppose by many of the current ideas… END_OF_DOCUMENT_TOKEN_TO_BE_REPLACED

These video and pictures include the final footprint of my tiny new space that will undergo construction in November 2018. The furniture and cabinetry are from IKEA but I may do all the design and construction myself which I will post as a separate article. I am so busy that I may not have time to… END_OF_DOCUMENT_TOKEN_TO_BE_REPLACED

I started to write an article on basic framing for those who are very much into a do it yourself construction of a tiny house. I have learned first hand many of the concepts involved, some by trial and error. In order that walls, openings, windows, and doors are properly fit together, one needs to… END_OF_DOCUMENT_TOKEN_TO_BE_REPLACED